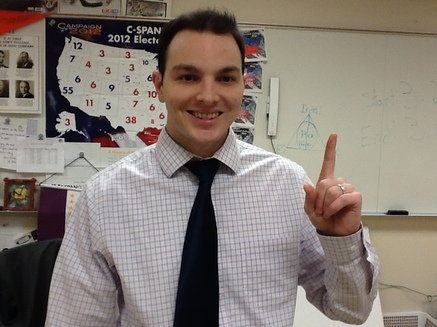 Mr. Petersen was heavily favored to get to championship, but he fell in the quarterfinals. I stopped in to listen what the gym teacher had to say after hearing what Mr. Rohan had just accomplished, “My reaction? I was quite angry! I was just mad.  I wasn’t that upset though because being the league is fun. The only upsetting part was I wasn’t able to trash talk... I didn’t mind losing to Mr. Rohan because he had a tough year being a Jets fan.” Mr. Petersen made it clear that I fit in the last part. I got a chance to sit down with the champ last week and talk about his victory.

Q: Who did you defeat?

A: Mr. Veeti from JFK elementary school or in the league he is known as Veets Leets.

Q: Did any player or players propel you to victory?

A: Wes Welker and Cam Newton carried the team with huge performances.

Q: Where was the demise of your opponent?

A: Hometown hero, Eli Manning, really let down Mr. Veeti. He left the Cincinnati Defense on the
bench who scored 20 points.

Q: What was the final score?

Q: Did you feel any pressure?

A: I felt a lot of pressure because I had a big lead and his last player scored a lot of points in the final
game and it seemed like there was enough time for a comeback but I was lucky enough to pull out
a close win.

Well, there you have it; Mr. Rohan can now cross "win fantasy football league" off of his bucket list.  He can also add "Champion" to his list of accomplishments.  Congratulations Mr. Rohan, you earned it.  If there was one word to describe the championship title: sweet.