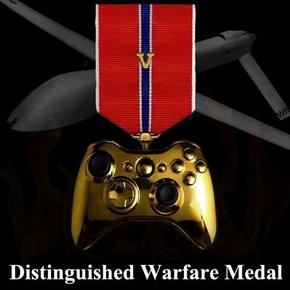 Medal Under Attack! by Danielle C.

It was dubbed the, “Distant Warfare Medal” and the “Nintendo Medal” by critics. This award has been shot at much more than the people eligible for it. What award is this? It is the Distinguished Warfare Medal. An award that honors drone pilots and soldiers in cyber warfare after September 11, 2001 and is awarded in the name of the Secretary of Defense. It was approved by the former US secretary of Defense, Leon Panetta on February 13, 2013. It does not recognize actions of bravery in battle and has no “geographical limitations” but is for “extraordinary achievement related to a military operation”.

So far, for someone to qualify for this medal, what they did must be one deed, not going on for a long period of time. It also must be so amazing that it outshines the other people involved. This deed while fighting with a direct enemy of the United States or any other hostile party, or while America is helping an ally. Not on a battle field though, but from far away, watching on a screen while the target (and others nearby) get blown sky-high.

Many soldiers, veteran organizations, lawmakers and everyday citizens have expressed a lot of outrage about this medal for several reasons. One reason that people hate this medal so much is because the drone pilots are never in any danger, yet their award outranks those who are. Also because this might strengthen the false impression people have that war is a game. Another reason is that these drone strikes are used to assassinate groups of people and individuals, but most times, hurt others in the process, yet it is legal off of United States soil.

The making of this medal has stopped due to the current Secretary of Defense, Chuck Hagel calling a review the medal’s criteria. No one has received the decoration yet and many hope that they get it on a lower rank or either never do.