A Juicy Craze by Anonymous 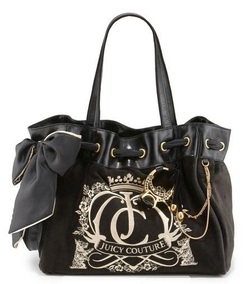 What is it about this Juicy Couture purse craze that’s making all these girls crazy as they scramble to obtain Juicy Couture purses, which are now literally impossible to find after this craze swooped over AWMS/Wayne? How did this gradual trend come to be this popular? Who started it? How much does it cost to be a trend follower? And why does every girl have to have one? This “juicy” scoop is right here in this article!

Someone told me that it was started by a group of unknown girls, who set this trend in our school. Also, as others gradually realized the fierce fashion in those purses, this trend officially begun. By the time it was November, at least half the girls had one ~ or even more! ~ Juicy Couture purses to carry around school and make their bold statement about their special self-style. But, no one really knows if that’s just a tall tale, or the real story, and it seems that with the population of these bags now, it’s impossible to ever know!

Well, now you know that nobody’s really sure exactly how this trend came to be, but it has sure got girls bonkers for the Juicy Couture purses! While some think it’s irrational to spend so much money on something so “tacky,” others think that these purses are “the bomb” and are a “must have” for middle school girls.

“They’re pretty, and they’re easy to match with my outfit.” A fellow juicy lover, and owner of their very own bag, said. :)

“I don’t understand the concept of following in trends! Girls should just be who they are and not have to worry about this stuff at such an early age! Plus, who wants to lug around those bags everywhere you go? Having to worry about them totally limits the freedom of movement you have!” was what another anonymous student claimed. :(

So, how much does it cost to be a trend follower? Numerous students asked me this one question that probably went off the chart as the most asked question in AWMS fashion history! And the answer is A LOT! $80 to around $500 is the current price to pay for being totally tote trendy! If I were you, I’d let this price sink into your mind before you go out and buy one. It never hurts to think twice about something, does it?

One question asked by a fellow Anthony Wayne student was:

“What do these girls carry in their purses that make them… want to carry them everywhere? I don’t get it?”

Well, after an interview with many gals who carry these wide spreading trendy bags, we were able to find many things about what makes these bags the top thing for carrying things, and what things.

For example, some girls told me that they carry tissues in it during allergy season, sunglasses when its sunny and warm outside, and hand sanitizers to keep their hands clean at all times. Others said that they carry makeup (not heavy makeup, but maybe mascara), chap stick, supplies for their braces if they have them, and other necessities to fit the life of a Juicy Couture gal. However, I was told by many that it is not the brightest of ideas to carry liquids such as water or any food in your purse, for obvious reasons of damaging it permanently.

If you do decide to get a Juicy Couture purse, I suggest getting a plastic one instead of the velvety and fuzzy kind. This is because they are easier to maintain if something spills on the outside because you can wet it and it won’t stain (maybe, depending on what you spill) as badly as if you were to get the velvet kind. Those velvet kind are harder to keep away from noticeable stains because the stain will get it wet and make it look worn out.