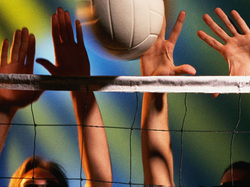 The annual 8th grade Volleyball Tournament was on Friday (the 22nd). Over one-hundred students participated and five teachers as well, creating a total of twenty teams. Each team having its own theme and original costume designs. I think the most original looking team was Hero Squad 6, because they, as their name suggests, were all dressed as different super heroes.  After several matches on the four courts, the finalists were narrowed down to be defeated by the night's winners: The Guys (Kevin W, Nate B, Noah K, Anthony D, Nick G, Dylan P, and Joe S.  Our congratulations to The Guys and all who competed in last Friday's competition!