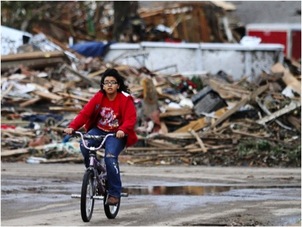 On Monday, May 19 a massive tornado hit the Oklahoma City area. This massive tornado ranged over 2 miles it injured 28 and killed 59 adults and 40 kids. It also ripped people’s lives apart. The tornado was only expected to be a small storm; otherwise the people would be more prepared. Mover 250 buildings were reduced to ash and 50 are still standing, but badly damaged. During the tornado 256 students and staff were trapped in Plaza Towers Elementary School, this school, was right in the path of the tornado. 20 of these kids died and 4 staff members were killed. Many thought that there was no way out because half the school was collapsed. At night the Red Cross made way into the tornado ravaged town helping kind the dead and save the hurt. They also gave out supplies to the people and helped them re-build. After many hours of search rescue was nearly concluded, the first lady herself gave time to help the people. She is currently raising money for them to get new homes and staples. Many shelters have opened up to the people giving them food and beds and keeping them off the streets and safe.

Many amazing stories of peoples struggle to live came out from the tornado like…..
According to CNN-

Tonya Williams, 38, said she still felt in shock after surviving the tornado, as so many did, by taking shelter in a closet. She put bicycle helmets on her 8-year-old daughter and 6-year-old son, collected her three dogs and pushed them all into a hall closet.

"We prayed. I could feel pressure, and being sucked. I put my body over them to try to protect them," Williams said.

When neighbors dug them out, the roof and upper story of the house had collapsed into and around the closet. Williams and her children suffered only minor injuries.

A large wooden cross that had been hanging on an upstairs wall was found on top of them, she said.

"If you weren't a religious person before, you are now," Williams said. "No word can describe it but a miracle."

This makes many think of how these people suffered and what we could do to help them. You can help by donating money to the first lady’s help fund or 5the Red Cross and giving them supplies.