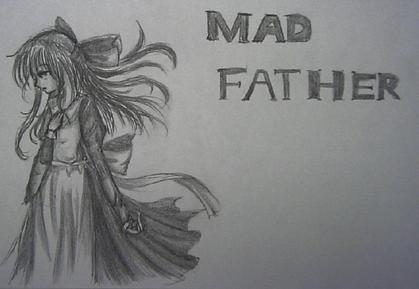 During an exploration in the web, I’ve had an intriguing zeal within the RPG Horror genre between games. Recently a game titled “Mad Father” has been translated from its original released from Japanese and has been open for free download. Since my expectations of previous RPG Horror games such as Ib and the Witch’s House (these games are unknown to many people), I did not expect a lot of things surrounding the game itself.  To my own amazement, this game had a consistent plot and a decent set of different characters. There were pleasurable but terrorizing scenes that would be sure to make you jump with complete horror.

The story itself surrounded of a girl named Aya Drevis, who is currently living in an olden Germany, with her father. Her mother had recently passed away, but Aya’s mom knew of the affair Aya’s dad had been having with his assistant, Maria. Her dad was a scientist and was insane when it went to experimentations, often holding hostage other innocent people that he has picked to test his own experiments and medical sciences on. Maybe people have died due to these circumstances, yet Aya’s father continued this obligation to reach his “goal” to preserve beauty.

On the day of her mother’s death anniversary, strange entities and events have begun to conjure up in the mansion. Things, such as the dead whom her father has killed, have resurrected for revenge against her father and eventually hurting Aya too. Aya, despite what all the others say, is determined to rescue her father from the clutches of the experimented dead, but is interrupted constantly from the other side’s people becoming obstacles.


On my own critique, this game was terrifying for me to even play alone, better yet “blindly” without knowing a single thing about the plot. There are mind-boggling puzzles, traps and dungeons to pass through, but certainly clever for the player’s brain. Not to mention there are 2 different endings you can get which make your choices throughout the game essential for the aftermath of the voyage. If this isn’t enough to convince you, there are even popular gamers on YouTube even trying this game out for themselves, right after I finished it myself on my own account, and being genuinely frightened by the genius of the game, including PewdiePie and Cry (ChaoticMonki).