Black Ops 2  by Faraz and Giovanni 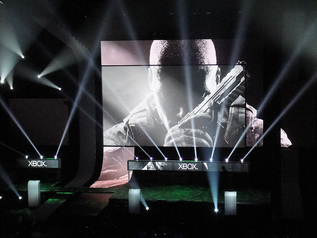 Today we are talking about Black Ops 2. The campaign takes place in the past, present, and the future.  It starts in the future with the ending which involves a choice to either kill or capture the "bad guy" captain.

Now let’s talk about the multiplayer.  The multiplayer is where you can verse your friends and random players. You know, as in all of the Call of Duty games, that you can make your own class with two guns and perks.   Well, in Black Ops 2, you can have a class with just a knife, but you have to have good perks.

The maps in Black Ops 2 are very big.  I’ll give you 2 map names:
. You may know of Nuketown in Black Ops.  Well, in Black Ops 2, you can have a map called Nuketown 2025 that looks similar, but it's better.

The last part of info is: Zombies!   There is all new zombies stuff, like Nuketown 2025 Zombies. There is also a new mode called "4v4v Zombies" where you and three other people go against other four players.  The catch is, if you have no good weapons but the other team does, you can buy their weapons from them.  The zombie campaign is not a "campaign" though, it is just a big map.