Hey, remember that game series that everybody liked and sold a ton of copies? Let’s change it. Well Capcom, challenge accepted. Growing up with a PS2, one of my favorite games to play was Devil May Cry 3. It was fun, tight controls, lots of replay ability, amazing music, and a meh overly convoluted story. Well, as I got older, I came to eventually play all of the Devil May Cry’s and really came to respect the series. I was really excited to hear that they were making a new DMC after so long. This was, however, replaced with confusion after the first trailer was released. There were mixed reactions from the fans, at the time of the first trailer’s release the large body of fans were disappointed. As time went on and more footage was released along with playable demo’s, people came to like the new DmC (retitled for some odd reason). I came to the game with a negative bias but wanted to remain objective. The game is… well…meh.

After I got my hands on the demo and really enjoyed it, my reaction changed. The gameplay was solid (aside from a few clunky sections and other gameplay mechanics that could be polished with little to no problem). The music was pretty cool too. However, I actually cared for the story this time around, after it was promised to be well written and good. The story felt like an okay fan fiction. The problem though is this is a Triple A game and not a fan fiction web site. Unfortunately, they had a team of writers, not one or two. So with this in mind, the story was a little lack luster.

Let me start off by saying every single character is paper thin and only serves one or two purposes. Dante’s dialogue is complete garbage (quite literally nothing more than cheesy one liners and tweeny “I didn’t ask for your help.” when he actually needed it), which is pretty offensive considering how much time they spent into writing dialogue for the old DMC’s. But that’s not the biggest offense, oh no, Vergil is by far the biggest offense! Why? Just why? I completely understand this is a reboot but that only makes me reference the source material more. And because of this, Vergil’s character is terrible. The original Vergil felt that humanity was beneath him, but felt great shame because he was not strong enough to protect his mother from a demon attack. Because of this he had a thirst for power, but his morals were heavily based on honor and would not do anything that he considered to have no honor or shameful to achieve his goals (you’ll see why I’m giving you all this back story in a minute). Vergil’s weapon, a katana (named Yamato), referenced Japanese samurai, who also had his morals heavily based on honor (this my friends is symbolism, an example of good writing). I won’t spoil any details (I don’t need to because it becomes apparent quick), but he has little to no honor while achieving his goals. This renders Vergil’s katana useless, if they changed Rebellion (Dante’s weapon) why not change Yamato? The only reason that new Vergil has Yamato is because old Vergil did, there is quite literally no other logical reason. While the overall theme of saving humanity is interesting, the execution is bad, and the characters that act out and portray the story feel like cardboard cutouts and have no charm. It’s really hard to like a story when you’re completely annoyed with the characters.

However, I’m also not afraid to sing this game’s praises. This game has the (absolute) BEST set pieces I have ever seen in a game, ever. Each level is unique because of most of Dante’s adventure taking place in Limbo. Limbo (while making no sense at all narrative wise) is amazing. Each level is new and unique, the plat-forming is fun (but overdone), and the constantly changing world makes it extremely interesting and a true pleasure to look at. And the bosses are amazing fun. They made multi-stage bosses super fun (which are usually not well executed, making them not fun), and each boss is funny and IS out to kill Dante. For example, the 3rd boss, Bob Barker, is a complete jab at a certain news network host. As is Raptor News Network, (Bob’s news network, which narrative wise, watches over humanity and controls the public through CCTV cameras) a complete jab at the news networks he works for. He even quotes one of the famous news anchor’s freak out lines.

Gameplay is honestly the hardest part of this game to review, if you’ve played a DMC before, you know how well made the enemy A.I. was and how challenging they were. If you haven’t, you’re going to think this game is gold, in actuality however, you’re being cheated in a manor. Not that the gameplay is bad in anyway, just compared to Devil May Cry three or four (three came out in 2005 and four came out in 2007) the A.I. is pretty bad. Rather than taking the time to program a challenging A.I., they have really cheap gimmicks and are frankly kind of boring after a short period of time. You attack red enemies with red (demonic) weapons, and attack blue enemies with blue (angelic) weapons. But as stated before, the plat-forming is fun and completely unique. The two most noticeable things are, they keep plat-forming new and fresh by adding new features after obtaining devil arms (weapons you get after beating a boss), and it is extremely boring and simplistic before they start adding the for mentioned features. The style system is a far cry from the old version. Rather than gaining and losing ranks fast, it takes a considerable amount of time to gain a rank and it doesn’t go down a rank unless you get hit.  On top of this the gameplay is extremely linear compared to the older games, but that’s either hit or miss with people so there is no definitive answer of whether that’s good or not. The replay ability (something that DMC is known for) is only medium do to the fact that the hardest difficulty they start you off with (Nephilem) is the equivalent to medium in any other game. All the others have a gimmicky style to them. Some are fun, most are unplayable. Also you only need four weapons out of the many they give you. The game is cheap and repetitive fun. Its saving grace is the addition of the plat-forming sections, everything else feels like a really dumbed down copy of the old combat system.

Honestly, the bad dialogue and a poorly executed story is reason enough to not buy this. If you are interested in DmC, please save your money and rent it. One play through is about 6 hours long, so you’re not getting a whole ton of content. On top of that, Capcom uses cheap money making tactics like day one DLC (downloadable content) and the promise of skin packs. I have no problem supporting a game I like after launch, but that’s just dirty and greedy. Also people seem to forget that the fans, you know the ones who give you money Capcom, didn’t ask for this product. Ninja Theory (the developers of DmC) should follow NetherRealm’s studios example of a reboot, Mortal Kombat (9) was amazing in what it did for the series. On a scale of one to ten (one being inexcusable, five being average, ten being a must buy) this game is a 6.5 out of 10. I really wanted to give it a seven but there was just one to many problems, if they choose to make another DmC title I really hope they put more effort and time into it.

So Capcom, you’ve successfully ruined one of your bestselling licenses yet again, what’s next?

Sly Cooper Thieves of Time by Faraz and Gio 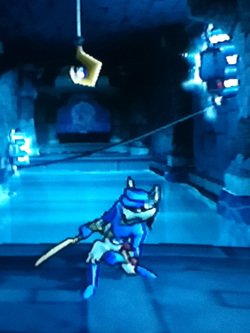 From a book of thieves to fake amnesia, Sly Cooper is the sneakiest raccoon ever! One day when everything is fine, Bentley's girlfriend Penelope was missing. When Bentley was looking at the thievius racoonus some technique was disappearing in his very eyes. Bentley knew there no time to waste and went to the demolition derby where Murray was doing for a living. On the other hand Sly was with Carmelita Fox was having a romantic life at Paris. Sly was really trying to stop being a thief but one night he could not take it and had to steal something really bad, and when he was going out he saw Bentley and knew something was wrong. When Bentley told Sly what was happening he knew the gang was back! Bentley create the van the power to time travel like from the movie Back to the Future. The only thing is that they have to steal something at that time period where they are going. When you meet the ancestor they have something in common with Sly personality and looks. Each of them has a special power that Sly does not have. Every time period there is a bad guy that did something to the most important day of the ancestor carrier and lock them up. When can play as Sly, Murray , Bentley, or Sly's ancestor missions. You can buy some moves for Sly, Murray ,and Bentley. There are some mini games such as Bentley’s hacking mini game or some random mini games. Some of the mini games have motion controls. That is like a space galaxy invaders type of mini game. The ending makes you wonder for a while and then you might ask yourself "What is going to happen next?"  When you’re done with the whole game you can replay missions or beat up the bad guys in the places. You can change costumes when your done. Each costumes have a power that Sly does not have if he has his normal costumes. The graphics look beautiful, too. Obviously the graphics are better than the PS2 Sly Cooper graphics.     This game is amazing and low in price at $40. If you buy it you will get two versions the PS3 versions and the Ps Vita version too. I think this game is awesome and worth buying.